My name is Rachel Totten Keith of Weatherford, TX. I retired from the US Air Force in 2014 after 17 years in the Security Forces career field. At my final duty station, I worked full-time as a Command (Criminal) Investigator at Naval Air Station Fort Worth and I voluntarily served on the City of Fort Worth Commission for Women in 2013.

In 2015, I was a member of a Facebook group for military members and their supporters called “Military Chive Nation.” After a seemingly benign request for friendship from a fellow group member, a woman identified and known only as “Bobbie Lei” directly messaged me and introduced herself as an NCIS agent. Not knowing that I worked with NCIS professionally, she began to describe herself and her experiences in a manner that was inconsistent with the conduct and duties of a legitimate law enforcement officer. After a couple of months of occasional messaging back and forth, I realized that Bobbie’s stories were not adding up. Because of the improbable nature of the statements she made to me, as well as the contradictory information contained in her resumes, online profiles, and various media interviews, I began my own private investigation into Bobbie Lei Sales’ background. Identifying myself as a private citizen, I obtained redacted police reports via FOIA requests from municipal police departments and accessed public county court documents which demonstrated that she is a con artist with documented sociopathic behaviors who takes advantage of military men by seducing them into marriage for financial support. I was also able to obtain a copy of an investigative report by social services in the state of Kansas which confirmed the physical abuse of her second husband’s 5-year-old son for which a restraining order was obtained—restricting access to her own step-son.

A quick Google search of her various legal names used, revealed several links to well-known news agencies such as The Daily Beast and AOL.com (as well as blogs) that published articles in 2014 detailing Sales’ pursuit of justice from the Department of Defense. In the articles she claims that throughout her first marriage, her husband US Marine Richard Moulder physically abused Bobbie to the point of requiring several rounds of corrective surgery. Bobbie also claimed she was repeatedly sexually assaulted by Moulder, and was even forced to have sex with other Marines. She claims Moulder was arrested by both military and civilian law enforcement for the abuse, but the DOD refused to prosecute her husband due to the “good old boy system.” However, the report Bobbie made to NCIS was found to be unsubstantiated—Moulder was never arrested by any law enforcement agency and no charges were ever filed against him. Furthermore, Bobbie has accused all three of her husbands of abuse, resulting in the false arrest of her third husband in 2018. Bobbie has used the news articles and her fraudulent reports of assault to gain sympathy online and even established Go Fund Me accounts, asking the public to help her get justice by donating money so she can fly to Washington, D.C. in order to testify at the Pentagon about how the military failed to protect her (another lie/scam).

Bobbie is able to profit financially by misrepresenting herself as a former military servicemember, an active duty service member, a DOD contractor, as a police officer, as a flight medic, cancer survivor, FEMA representative, victim’s advocate for San Diego children’s abductions unit, and more, through the use of forged documents, her sponsors’ military status, and internet resources to include Go Fund Me fundraising accounts and the deliberate manipulation of disabled veterans and Gold Star families’ heartache. Lt. Servin from the San Diego Police Department stated to Marcella Reed Monroe that “on the night of March 19th, [Bobbie] identified herself to me as counsel and legal aide to Mr. Joshua Reed, and wanted me force you to hand over your daughter for the order of protection, while Mr. Reed was nodding in agreement.” Bobbie preys on the families of fallen service members by falsely claiming that she lost a brother in Afghanistan and then uses the connections and relationships she develops with the families to gain their trust and sympathy. Unbeknownst to the service members’ families, Bobbie has raised money on their behalf to “help cover incidental expenses until life insurance kicks in.” Once she raised enough money, she claimed to give the money to the families but the families confirmed no money was received.

In 2015, Bobbie was able to obtain a volunteer position with a legitimate non-profit in San Diego, CA called “Independence Paws” by befriending the founder and president Lauren Trathen. Independence Paws trained disability service dogs and donated them to those in need, including disabled veterans. Trathen funded her programs through donations from the community as well as her own income. Bobbie led Trathen to believe that she was veteran like Trathen herself. Bobbie also claimed to have attended a Department of Defense military working dog course that qualified her to train and certify service dogs to provide comfort, aid, and assistance for the disabled community. Under the name of the “Independence Paws” organization, Bobbie engaged in many other types of illegal activity to include theft of property from Independence Paws, theft of funds, fraud, and sold rescue dogs as trained disability service dogs to disabled veterans in order to raise money for personal financial benefit. Bobbie took a completely untrained rescue dog, updated his shot record, and within one month had sold the dog as a service dog to a disabled veteran in Colorado for $2500. She forged paperwork and created fake certificates to give to the disabled veteran and flew the dog from California to Colorado using the fraudulent documents. The veteran soon realized the dog was not only untrained but was not even potty trained. The veteran was forced to give the dog away and was never able to get his money back. Because of Bobbie’s fraud, Trathen had to close her non-profit and lost thousands of dollars and her life’s work.

Bobbie Lei Sales claiming her brother was special forces and was KIA.

Bobbie is also known for adopting rescue dogs and rebranding them as former law enforcement K9’s for sale or “donation” and claims to be a former military working dog handler, certified to train dogs as disability service animals. In November 2016, she petitioned the Indiana courts for modification of the custody order for her two children. The father was awarded full custody and Bobbie was only granted limited supervised visits. She was in dire need of money to pay her attorneys because they would not represent her without being paid upfront. In one day, Bobbie started a Scentsy business (which was also used as a fundraising scam “on behalf of gold star families”) and she created a WordPress website for a non-existent “501c3 tax-exempt organization” called Special Forces Bravo. Special Forces Bravo does not exist other than on her website. There is no such organization registered in the two states Bobbie was residing (Rhode Island or California) nor is it registered with the IRS, despite her claims that SFB received its 501c3  tax exempt status as a non-profit corporation. She is not listed on any board for any organization either. After she created the website, Bobbie began a fundraising campaign by posting links to her website in military and law enforcement Facebook groups and solicited donations to help provide training for service dogs and to help support and locate working dogs for law enforcement agencies. Several disabled veterans applied to receive a trained service dog at no cost. The applicants that I interviewed stated that they never received a response from Special Forces Bravo and one stated that after being promised a free dog, Bobbie began requesting hundreds of dollars in order to receive said dog. At least one untrained German Shepherd was sold to Bobbie, but she refused to pay the seller after taking custody, insisting that the dog was sold with severe, undisclosed health issues. Bobbie was able to place this same dog with the Alamogordo Police Department at no cost. Because she does not have the capability to train a service dog, she claims on her website that the “service dog” she sold for $2500 was donated under the name of the Special Forces Bravo charity.

In 2017, Bobbie began an intimate affair with Joshua Reed, a US sailor stationed at the same base as her then-husband. Joshua Reed and Bobbie decided they were going to leave their respective spouses in order to be together. Joshua did not want to pay child support to his wife, Marcella Reed, and he believed Bobbie would be a good step-mother to his daughter despite not having custody of her own children. Both Joshua and Bobbie individually called 9-1-1 and reported that their respective spouses had physically assaulted them. San Diego PD arrested Marcella and Joshua received a temporary protective order and temporary custody of  their daughter. Bobbie had her husband arrested and received a temporary order against him, as well. With the respective spouses in jail, Joshua and his daughter stayed over at Bobbie’s home in Coronado, CA. Both divorces have been finalized and Marcella has full custody of her daughter.

NCIS investigated Joshua Reed and Bobbie Sales. Bobbie told the California courts (via paperwork filed) that she splits custody of her children 50/50 with their father, Richard Moulder. However, my copy of the most recent custody order shows that she is not allowed any visitation or even phone calls with her own children. She is only authorized to speak to her children during their therapy sessions over the phone with the therapist present on the line. The state of Indiana has restricted Bobbie’s access to her children specifically because of its concerns regarding her mental health status and have determined that even telephone conversations are harmful to the children.

Bobbie Sales has since remarried to an active duty Air Force pilot (her fourth military husband) and relocated to Clovis, NM. 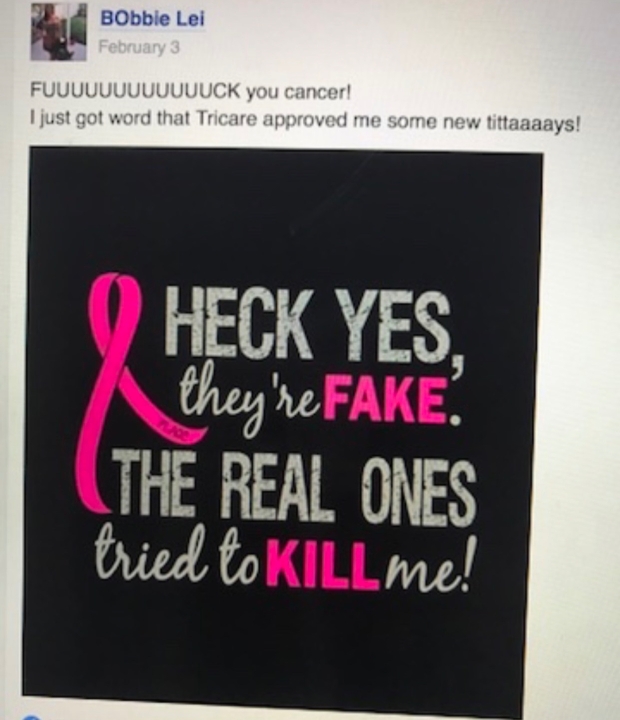 All of the above statements are true and correct to the best of my knowledge and I have evidence in the form of reports, court documents, saved files, screenshots, and interviews conducted with Bobbie’s victims. I have more information on Bobbie Lei Sales but I have included only the incidents most relevant to the current investigations. I am available to answer any questions at make0ut.bandette@gmail.com or rtkeith@outlook.com.

AND MOST IMORTANTLY: If you are a victim of Bobbie Lei Sales/Miller/Moulder/Herron/Hazelbaker/Adams, it is paramount that you report the incident to your local police department, NCIS, AFOSI, or FBI. Many law enforcement agencies can even take reports online. You are welcome to share this article on social media so that others can be warned. Thank you for reading and for your support.

Please join this amazing group of intelligent and supportive female veterans, both currently serving and veterans at Sisters In Arms Group.